Is there such a thing as the perfect proposal, Harry decides to find out proposing to his best friend Suzie in one hundred different ways but which one will capture her heart?

‘Ok, you can open your eyes now,’ Harry said. I blinked in the gloom of the cave. Moonlight tumbled through the opening above us reflecting off the waterfall as it cascaded into the pool below.

We had been in Australia for just a few days but I knew it would never cease to amaze me. Dancing in the pockets of the cave walls were hundreds of glow worms, sparkling like fairy lights. Natural Bridge in Springbrook National Park was home to one of the largest glow worm colonies in Australia and I'd been keen to see it for myself, but nothing could have prepared me for what happened next...

What location did you choose for your SUNLOUNGER short story competition entry* Australia, Springbrook National Park near the Gold Coast and Tangalooma. I went to Australia a few years ago on my own and it was just the most amazing place. It was a one stop shop for rainforests, waterfalls, beautiful beaches and fantastic wildlife. I was only there for three weeks but I scuba dived on the Great Barrier Reef, white water rafted down the Tully River, went whale-watching, sand-tobogganing, trekked through rainforests, went horse riding near Cape Trib, saw Steve Irwin in the Australia Zoo, fed a cream tea to rainbow parakeets, swam with dolphins, shared my lunch with a roo, not willingly, might I add. And met the most marvellous, colourful, friendliest people that I will never forget. Hopefully some of the beauty of the place will come through in my story.

*Holly’s story ONE HUNDRED PROPOSALS won the competition and she received a pink carry-on case brimming with travel goodies including a Pan Am flight bag and Plum Pretty Sugar summer robe. ‘Holly’s story was just perfection – heart-twirling romance set amid the most gorgeous and original settings (all beautifully described!). The story summed up the SUNLOUNGER mission of dreamy escapism in a delightfully warm and funny package!’ Belinda Jones

If you could live anywhere in the world… I’ve been to lots of places that I’ve wanted to return to, but the only place I’ve ever wanted to live was New York. There is something about the place, it just felt like home. Maybe it was that it literally is the city that never sleeps. I remember sitting in a bar, eating a slice of cheesecake, looking out over Times Square and watching the world go by, until very early hours in the morning. The sports shop opposite was still open when we left at 3am, because who know when you might need to buy a pair of trainers? And anything goes. Every culture, every religion, every country is represented in it’s full colour. Even teenagers that looked like they would cause trouble were the politest bunch of kids I had ever met.

Destination you’ve returned to the most times? Am I allowed to say America? That’s a bit of a cheat as it’s so vast but I’ve been there more times than any other country. New York, Chicago, Seattle, Colorado, San Francisco, Florida, the Grand Canyon and Las Vegas so far with soooo many more places I’d like to visit. Alaska is next on my to do list next. I love the States as people are so friendly. They really take the time to talk and help you in any way they can.

Favourite cuisine from around the world? Pizzas in Rome, I’ve not tasted better. Italian ice creams are good too, so thick and tasty.

Favourite holiday cocktail? Not a cocktail but I do love Sangria, just reminds me of warm holidays in Spain.

What has been your best and/or worst holiday romance? On a holiday to Spain, I met a lovely Scottish lad called Dave who seemed to really like me. We agreed to meet for drinks one night. That day I went to the beach and fell asleep face down on my beach towel, under an umbrella. The sun moved and I carried on sleeping. When I woke up my legs and bum were burnt so badly that they were postbox red. I have never been in so much pain in my entire life. I didn’t want to blow off my big date and so went along anyway and hoped I could get through the night without bursting into tears. Of course I couldn’t sit down and every time I tried, I leapt straight back up again. I was too embarrassed to tell Dave that I had burnt my bum so I told him I wanted to dance. I couldn’t do that very well either so after staggering from side to side in a poor attempt to dance sexily, I excused myself to go to the toilet. The bathroom floor was tiled and I eased down my trousers and sat on the cool tiles to get some temporary relief. I could almost hear the hiss as my hot flesh touched the floor. And that’s how Dave found me a few minutes later when he came to check if I was ok. Needless to say, I never saw him again. 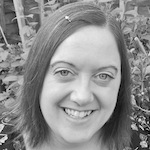 Holly lives in sunny Bedfordshire in a house with round windows. She studied media at university which led to a very glitzy career as a hotel receptionist followed by an even more glamorous two years working in a bank. The moment that one of her colleagues received the much-coveted carriage clock for fifteen years’ service was the moment when she knew she had to escape.

She quit her job and returned to university to train to be a teacher. Three years later, she emerged wide-eyed and terrified that she now had responsibility for the development of thirty young minds. She taught for four years before History Off The Page came to her school to do a Tudor day. She now drives round the country in her little white van, dressing up as a Viking one day and an Egyptian High Priestess the next.

She’s been writing for five years, mainly chick-lit novels. CHANGING CASANOVA and THE CHAINSAW MASQUERADE were shortlisted for the Festival of Romance New Talent Award 2012. Her short story, ONE HUNDRED PROPOSALS, won the Belinda Jones Travel Club short story competition last year and was published in the first SUNLOUNGER anthology. Her fantasy adventure young-adult book, THE SENTINEL, was published in October and hit three different bestsellers lists within twenty four hours. She won the Carina Valentine’s competition at the Festival of Romance 2013 and her novel THE GUESTBOOK was released on Valentine’s Day 2014.