Having lost her best friend and her boyfriend in one fell swoop, Kelly decides to make like a pirate and drink rum in the Caribbean. But then she finds an even better cure for her heartache…

Jennifer Lopez, Ricky Martin and that adorable hotel manager from Pretty Woman. That’s how my ex-best friend Ali would have summed up the appeal of Puerto Rico.

For me, it’s all about the dinoflagellates. Those sensitive little marine plankton that glow bright bluish-white when agitated, creating the ethereal magic that is Bioluminescent Bay... When you find yourself disillusioned in life I think it’s important to go in search of something to fill you with wonder.

Tell us about the location you chose for your SUNLOUNGER short story… I chose Puerto Rico – a colourful, Spanish-speaking Caribbean island that just happens to be home to the biggest rum distillery in the world. I loved the idea of all the brightly-painted buildings in old San Juan, which sounds like an odd reason to visit somewhere – because of the paintwork – but there we go…

Have any of your books featured exotic destinations?  Yes! All of 12 them are set abroad! Travel is my best writing muse. You can click this link and it will take you to a page showing you all the destinations – from Capri to Tahiti!

If you could live anywhere in the world… Italy. I’ve got it all planned: I would spend Spring in Rome, Summer in Capri, Autumn in Venice and Winter in Cortina (dressed exactly like Claudia Cardinale in The Pink Panther).

Destination you’ve returned to the most times? California. I actually recall not wanting to go the first time a magazine sent me to LA to interview the cast of Baywatch. I thought everyone would be too unbearably thin and blonde and I’d just feel a wretched lump. Instead my heart expanded like a life jacket and I was so uplifted by the vast blue skies and sunny, optimistic dispositions of the people I ended up moving there and – believe it or not – my first apartment was sharing with a Baywatch cast member. (Tasmanian bad boy Jaason Simmons) We even had a hammock in the back garden. I had to pinch myself every day. Periodically I’d mess up in some way and have to move back to England to regroup but I’d always head back there as soon as I could…

Favourite cuisine from around the world? I have to agree with the majority of Sunlounger authors – I love the fragrant delights of Thai food. I have sat on the banks of the Chao Prao river in Bangkok and dined upon exquisitely-presented platters but my absolute favourite is the Chicken Yellow Curry from the Pink Pepper on a not-so-salubrious boulevard in Hollywood.

Favourite cocktail? I go in phases. For a while it was the French Martini, which was probably a teeny bit sophisticated for me, then when I was researching THE TRAVELLING TEA SHOP in Newport, Rhode Island I discovered the Dark & Stormy (darkest rum and ginger beer) which is a rather more robust pirate drink. But since Puerto Rico I’m all about the Oakheart Bacardi and Coke.

Worst holiday romance: The Greek man who ‘assisted’ my research for OUT OF THE BLUE. He needed his own air traffic control tower to keep track of all the women he was over-lapping around the globe! Even at my book launch in London I ran into two women who had slept with him while holidaying in Crete – one of whom was a childhood friend of mine. Honestly!

Best holiday romance: Meeting my husband on New Year’s Eve at a retro piano bar in Los Angeles. I was living there at the time, he was the one taking a holiday from his Navy Training Base in Chicago. My best friend Sam (Sunlounger’s Art Director) was with me which just made it even better. We stayed up all night, had a diner breakfast at Fred 62 then went to the Arclight cinema to see Revolutionary Road, which is the most un-date-like movie of all time (Leonardo Di Caprio and Kate Winslet trapped in a claustrophobic Fifties marriage) but he held my hand the whole way through. 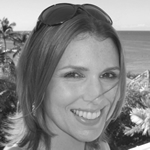 BELINDA JONES is the author of 11 vacation-for-the-price-of-a-paperback chick lit novels, one travel memoir ON THE ROAD TO MR RIGHT (which made the Sunday Times Top 10 chart alongside her hero Bill Bryson) and a Peter Andre Annual.

Though not remotely summery, WINTER WONDERLAND was short-listed as Best Romantic Comedy by the Romantic Novelists’ Association.

Prior to writing books, Belinda spent 10 years writing for magazines including New Woman, more! and Empire.

She currently lives halfway up a mountain in San Diego, California with her American dog Bodie and US Navy husband Jonathan.

Belinda’s latest book is THE TRAVELLING TEA SHOP, a yummy tale of love and cake – out now!