What is the significance of the Red Glove? Will Penelope find out before it’s too late…

This is the story of how Penelope met Mike. It’s a simple story I guess – when you consider that all she did was step into a butcher shop with a delivery of fruit and vegetables for the shop’s owner.

But if that was the whole story then we’d simply stop right here. We’d leave them standing amongst the lamb chops and the beef mince (on special, two kilos for the price of one) and we’d finish off with the obligatory ‘…and they lived happily ever after.’ But it doesn’t end there. And it doesn’t begin there for that matter. Because things are always more complicated than that…

Tell us about the location you chose for your SUNLOUNGER short story… THE RED GLOVE is set in outback Australia (country New South Wales to be exact). I chose it because there’s so much to love about the outback – the vast expanse of land where you can see hundreds more stars at night, the bush, the heat, the laid back friendly people. Living in Sydney, I don’t get out to the country as much as I would like and now that I’m thinking about it, it’s probably time to plan a road trip!

Have your books featured any exotic destinations? FREE-FALLING was based in Sydney, Australia. PAPER-CHAINS was mainly split between Australia and the UK but the characters also spent time in the Greek Islands and New York!

If you could live anywhere in the world… Look, I’ll be honest, even though I already live here, I’d still have to pick Sydney! But I would love to move closer to the beach – if I can ever afford it I’ll move to the cliffs above Clontarf Beach (about an hour’s drive from me at the moment).

Destination you’ve returned to the most times? Avoca Beach, on the Central Coast of NSW, Australia. We head up there for weekend breaks every now and again – I’ve been holidaying there since I was small and I love it! It has that familiarity that always takes me straight back to being a child eating melting lemonade iceblocks when I step onto the sand.

Favourite cuisine from around the world? I know you can get pizza anywhere but I remember being in Rome with my husband (although he wasn’t my husband at the time) and buying these great big squares of pizza that you ordered by their weight. It was stiflingly hot and we ate the pizza along with these sour crushed ice lemon drinks and for some reason I simply remember it as being my best ever pizza experience!

Favourite holiday cocktail? Pina Colada – mostly because of the song – but also because it tastes so good.

Worst holiday romance? I met this guy on a weekend trip to the NSW snowy mountains. He was pretty good-looking and somehow this blinded me from noticing what an absolute ass he was. He was controlling, cruel and I crazily dated him for about two months before I woke up to myself.

Best holiday romance? Surfer’s Paradise, Queensland with a boy who I’d just met and started dating. He and his friends already had this holiday planned and he invited me along. I had so much fun, his friends were great – we went out to daggy clubs and danced to nineties music, visited theme parks and screamed on roller coasters, hung out at the beach and played drinking games… Five years later, I married him! 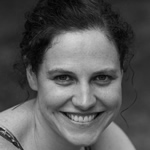 NICOLA MORIARTY lives in Sydney’s north west with her husband and two small (but remarkably strong-willed) daughters. She is the younger sister of bestselling authors Liane Moriarty and Jaclyn Moriarty. In between various career changes, becoming a mum and studying at Macquarie University, she began to write. Now, she can’t seem to stop. She has published two novels with Random House Australia (FREE-FALLING and PAPER CHAINS) and has a novella titled CAPTIVATION due out in July.