Laura and I were hauling squashed sandwiches and warm lemonade out of the boot of the car when Stella appeared on the brow of the hill and sped towards us wailing like a banshee, arms outstretched, flip-flopped feet skidding and slipping on loose stones and rocks.

'Man!' she screamed, pointing back up the hill we’d chosen for its breathtaking view of the bay. 'Up there.'
'A man you say? In Rhodes? Who’d have thought it?' Laura rolled her eyes and I laughed.
It was no secret that Stella was desperate to get over Simon but surely her man hunt could wait until we’d had some lunch. We’d only been on holiday for four hours. There was a full six days to go on the pull!
'He’s naked!' Stella breathed.

Tell us about the location you chose for your SUNLOUNGER short story… Rhodes – I spent a wonderful holiday there a few years ago with one of my best friends. There’s something tranquil yet magical about the narrow, winding lanes and small shops of Lindos town all nestled together under the ruins of the acropolis. It’s just the sort of place I could imagine a Greek god dropping in to visit!

Have your books featured any destinations? So far all of my books are set in the UK (London and Brighton) but the one I’m working on now – a dark pychological suspense novel with the working title AMNESIA GIRL – is set in Nepal.

If you could live anywhere in the world… I’ve never been to Australia or New Zealand but the wide open spaces, gorgeous scenery and beautiful beaches really appeal to me and I’d love to live there for a while to see if it lives up to my expectations.

Destination you’ve returned to the most times? Paris. It’s my favourite city in the world. I love the architecture, the museums, the art, the cemeteries (I know, I’m a bit weird like that) and the history. I discover something new whenever I visit.

Ticket, passport, money and… A good book. I’d feel naked without one!

Favourite cuisine from around the world? Mexican (though my waistline isn’t so keen)

Favourite holiday cocktail? Do I have to choose just one? Probably a mojito – lovely and refreshing.

What was your best or worst holiday romance? My one and only holiday romance took place when I was fourteen. My dad was in the army at the time and we were living in Germany. Every summer the regiment would arrange a summer camp (involving bike rides, caneoing, swimming, pony riding etc) for the teenagers and the one that summer was in Denmark. I didn’t know anyone else going but I soon got talking to another girl on the coach. We’d been chatting for a while when two boys came over and asked us if we’d like to sit on the back seat with them. I wasn’t sure – I’d heard what happened on the back seat of buses! – but my new friend convinced me (and Chris, the blond boy of the pair, was very handsome).

Eight hours later, hiding behind the dining tent, we kissed for the first time. I was in love! For the next couple of days Chris and I went everywhere together – to the beach, the cinema (I nestled my head on his shoulder and pretended to be interested in ‘Wall Street’), to a theme park and then to a bowling alley. And that’s when everything went wrong. My family are quite competitive when it comes to bowling (I’m normally last) so naturally I gave it my all but the more strikes I scored the grumpier Chris’s became. When I won the game he stopped talking to me completely. (I was fourteen, I had no idea about male pride). The next day he disappeared off with a pretty blonde Danish girl. A couple of hours later my friend told me they were a couple and he didn’t want to speak to me again. I was heartbroken.

Later that evening, I wandered down to the beach alone to sit on the jetty and cry (melodramatic much?). About thirty minutes later I traipsed back to the campside, only to realise I’d left my camera behind. I hurried back to the jetty but the camera was gone, along with all the memories of my ‘relationship’ with Chris.  I never signed up for summer camp again. *sob* 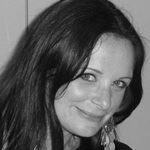 CALLY TAYLOR lives in Bristol with her boyfriend, toddler son and their ridiculously large DVD/book/music collection. Her international bestselling romantic comedies, HEAVEN CAN WAIT and HOME FOR CHRISTMAS were both published by Orion in the UK. They have been translated into 14 different languages, and her debut was voted ‘Debut Novel of the Year’ by chicklitreviews.com and chicklitclub.com.

Cally’s latest novel, THE ACCIDENT (written as CL Taylor), is a new direction – a dark psychological suspense and will be published by Avon HarperCollins April 10th 2014.