The reading of a will prompts Emily to take a journey of discovery to the Caribbean island of her childhood.

‘I’m so sorry for your loss,’ the blowsy-looking woman on the reception desk said quietly, after Emily Butters introduced herself.

‘Thank you,’ Emily muttered. Inside her jacket pocket, she twisted the sodden tissue around her fingers, praying she wouldn’t need to use it again – her eyes felt raw and resembled a pair of overly engorged mushrooms from all the tears she had shed.

Tell us about the location you chose for your SUNLOUNGER story… Cayman Brac belongs to the Cayman Islands and looks like the perfect hideaway with its sandy beaches and tucked away coves – simply peaceful, tropical, mystical and magical.

Have any of your books featured exotic destinations? Both CUPCAKES AT CARRINGTONS and CHRISTMAS AT CARRINGTONS are set in a fictitious seaside town. It may not be exotic but it’s heavily based on my beloved Brighton where I was born, spent my childhood and still live now. For me, there’s no other place like Brighton – the peppermint green railings on the promenade, the iconic pier where I worked as a teenager in a t shirt printing shop owned by a retired drag queen, but most of all it’s the vibe, the unique something that Brighton has and I’m not talking about the trendiness, it’s more than that, it’s the locals I grew up with, the memories of all night parties on the beach, the basement nightclubs now long gone, the little monkeys on the old West pier, eating sandwiches on the beach after school, running through the deserted Laines in the early hours of a Sunday after an epic night out at one of the secret dance venues. Shopping in Hannignton’s, a magnificent powder-blue department store, the inspiration for Carrington’s department store… I LOVE it all.

If you could live anywhere in the world… San Francisco – it’s a very special place for me  because my sister has lived there for over twenty years and I have such fantastic memories of visiting,  it really is a home from home. I get homesick for San Fran, even though I don’t live there! I love everything about it – the happy vibe, the tourist sights, but most of all just hanging out and catching up in my brother-in-law’s bar, O’Reilly’s, in the famous North Beach area.

Destination you’ve returned to the most times? San Francisco (see above!)

Favourite cuisine from around the world? Sweet potato and chickpea tagine. 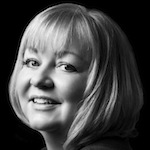 ALEXANDRA BROWN is the author of the funny, romantic Carrington’s series. Set in a department store in a pretty seaside town, the series follows the life, loves and laughs of sales assistant, Georgie Hart. CUPCAKES AT CARRINGTON’S was published in January 2013 and spent three consecutive weeks in the top ten of the Fiction Heatseekers Chart, and was selected as debut of the month by Sarah Broadhurst for The Bookseller.

She is the former CITY GIRL columnist for The London Paper and has written for a range of publications including YOU magazine, Cosmopolitan and Elle. Alexandra lives near Brighton, on the South Coast of England, with her husband, daughter and a very shiny black Labrador puppy. 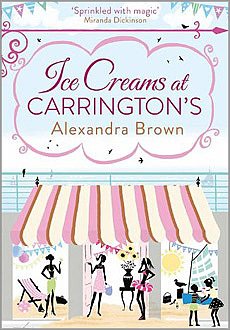