Tasmania is hot. So are the men. Especially when they are wearing a furry animal outfit.

Amanda stared at the dining table. Apple pie. Home-made apple cider. She had come to Tasmania to pick apples on her aunt and uncle’s farm for the summer, but she had not expected to eat them every day as well.

Amanda knew it was wrong, but she was dying to go home. After two months in Tasmania, she was too hot, too bored and too hungry, largely because of the apples. This part of Australia was so backward – even the pregnancies in Eastenders were nine months behind. Her holiday so far had involved standing on a ladder, picking fruit and wondering if she would ever save enough money to see the rest of Australia.

Tell us about the location you chose for your SUNLOUNGER 2 story: I grew up in Tasmania, Australia after my family emigrated from London when I was small. After years of travelling and living all over the world I just bought a house there again so it’s very much on my mind. Tasmania has listed World Heritage wilderness and it’s very beautiful.

Have your books featured any exotic destinations? Funnily enough I was the editor on a HarperCollins travel book called THE HOLIDAY GODDESS GUIDE TO PARIS, LONDON, NEW YORK and ROME. Some other novelists, like Faith Bleasdale and Rebecca Sparrow, were also involved.

If you could live anywhere in the world… I would have to say Tasmania, having just made the commitment to move there, and Melbourne, where I live for the rest of the time. I do love London, though. My favourite time in London is 6am in summer when it’s light and there’s nobody around except the street-sweepers. There’s so much space and it’s amazing how quickly you can nip down from somewhere like Victoria Station, all the way to Soho.

Destination you’ve returned to the most times… I always go back to London, every year. I try to go in autumn and winter when there are less people. From there I always revisit Bath, Stonehenge, Edinburgh, Brighton, Glastonbury, Liverpool. And Lewes. I do love Lewes!

Favourite cuisine from around the world? The cheesecake at Junior’s in New York. For breakfast.

Favourite holiday cocktail? Just a straight glass of Talisker scotch in Edinburgh will do me.

What was your best/worst holiday romance? They were both astrologers but one of them didn’t do my kind of astrology – epic fail. 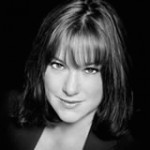 Jessica Adams is the author of several novels for Black Swan and a team editor on the Girls’ Night In and Kids’ Night In series in aid of War Child.

She is a Contributing Editor at Cosmopolitan and the online astrologer for Harper’s Bazaar.