Jane arrives in Vietnam and finds a country as full of chaos as she is. With her relationship teetering on the brink, and the authorities on her tail, Jane goes on the run. New adventures and opportunities await, but will she be brave enough to take them?

‘Miss, miss, this way! I take your bag!’ I’m standing in the arrivals hall of Hanoi Airport, surrounded by my new best friends. Sure, they also happen to be hotel touts, but they’re really looking out for me.

‘Miss, your hotel with me, I take you miss! Not go with him, he is bad man, very bad.’ My mother would be so relieved. When I announced that I was planning to spend the summer after uni backpacking solo through Vietnam, she lectured me for two whole hours on what a dangerous idea it was. By the end I wished I was going to Ibiza like everyone else on my course.

Tell us about the location you chose for your SUNLOUNGER competition entry* I chose Vietnam, because in my experience it lends itself well to capers!

*HANOI JANE made the Top 4 in the first SUNLOUNGER short story competition. ‘Kate’s writing was as original as her story setting. She has a distinctive ‘voice’ and flair that is so very important in women’s fiction. I absolutely loved this story and can’t wait to read more from her!’ Belinda Jones

If you could live anywhere in the world… I’m still figuring this one out, and I think I’ll always be a bit of a roamer, but nowhere in the world has ever grabbed me like London does. So while Australia will always be ‘home’, I’ll probably end up in the UK. But if it could first import Melbourne’s coffee, and the Outback’s night sky, and all my family and friends, that would be grand.

Destination you’ve returned to the most times? Queensland’s Gold Coast, mainly because that’s where most Aussie kids born east of Melbourne tend to go on holiday, if they nag their parents enough. It’s Australia’s version of Florida, with theme parks galore and miles of beaches. I went three or four times as a kid, then after high school finished I went again with my friend Caz for ‘Schoolies Week’, when all the school-leavers are supposed to go crazy with newfound freedom. Not us. We were lame. My little brother did the same trip a few years later and returned practically on an IV drip, with a giant tattoo scrawled across his shoulder that said ‘laugh today, cry tomorrow’. But Caz and I were 18 going on 80. I remember one day we bought tickets for a ‘dinner cruise’, thinking it would be a lovely, sophisticated thing to do. We arrived at the dock in our heels and LBDs, all ready for a glamorous evening on the water. Ha! We spent the night huddled in a corner, trying not to scream at the increasingly debauched carnage unfolding around us. In fact we couldn’t scream because if we opened our mouths someone would shoot a giant water pistol full of vodka into them. We couldn’t go to the toilet for fear of being manhandled into a body-painting session, or a strip show. The next day, feeling traumatised, we treated ourselves to a lovely coach tour through the hinterland – average passenger age: 75 – stopping for Devonshire tea at ye olde tearoom. It was bliss. The Gold Coast – something for all ages.

Favourite cuisine from around the world? Mod Oz! Which, despite what people might think, is just all the good stuff that we pilfer from elsewhere, thieving convicts that we are – Thai, Japanese, French, Italian, Greek… and always plenty of seafood.

Favourite holiday cocktail? It’s not really a cocktail, but I can’t go past a Bombay Sapphire G&T with a good squeeze of grapefruit juice.

What has been your worst holiday romance? I’m too embarrassed to tell you about the worst – let’s just say it involved a fire twirler (hence the mention in my story), and I stank of kerosene for a week.

And your best holiday romance? That’s easy! A working holiday to the UK in 2006 – I fell for a charming, clever, funny Englishman. Reader, I married him. 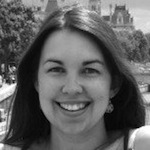 KATE GUEST is an Australian journalist, born in Yarrawonga, Victoria, and currently based in Kuala Lumpur, Malaysia. Before moving to KL she spent 7 years working in media in London, an experience that ranged from the sublime (subediting Jamie Oliver’s magazine, where the regular consumption of amazing food was a job requirement) to the ridiculous (night shift media monitoring, where she rote-learnt the GPS coordinates of every 6am-opening pub in the borough).

She has worked for Harper’s Bazaar (Australia and Malaysia), Australian Gourmet Traveller, Grazia and Food & Travel, among others. Hanoi Jane is her first short story, but hopefully not her last. She is currently completing her first novel.