Havana 2075: after the death of her beloved grandmother, Harper is tasked with packing up Katie’s flat – but while she’s there she discovers a box of love letters written to the mysterious Blue, who saved her grandmother’s life in the fictional bombing of London in 2014.

London, England, February 14 2014: It was a grey, stormy day when the first explosion erupted. At first there was only silence: a stunned pause where everyone drew in a sharp, bitter gasp.

Those in their offices raced to their windows to watch a ribbon of thick black smoke twist into the sky. Others – tourists who’d been battling the rain as they’d walked along Oxford St, and Londoners who’d been looking for last-minute Valentine’s Day presents – stood still and allowed themselves to make eye contact with strangers. Had there really been a bang?

Tell us about the location you chose for your SUNLOUNGER 2 story… WE FOUND LOVE is set in the future (and part imaginary!) city of New Havana in 2075. I love Havana: I can’t get enough of the colours and the history of the buildings, the spirit and sense of fun in the people who live there, and the beautiful weather. Cuba also has a very different political system to ours, yet despite this the city was my first choice for my displaced Londoners to end up – I can’t think of anywhere nicer (apart from maybe Buenos Aires!) to start a life again.

Have your books featured any exotic destinations? THE MAKING OF MIA – Longboat Key in Florida, and Miami where Jo Hill turns into Mia Blackwood. SPOTLIGHT – New York and a beautiful ranch in Oklahoma. ALL THAT GLITTERS – Paris.

If you could live anywhere in the world… I have family in America so I’d love to live in New York state in order to see them more! But I’m a Londoner at heart – I’ve lived here since I was 18 and I don’t think I could ever leave it. Not unless I was whisked away by a handsome stranger (but not in the kidnapping sense)!

Destination you’ve returned to the most times? When I was younger my grandparents had a place on Longboat Key in Florida and I spent lots of holiday time there – it will always be a special place to me with lots of happy memories. I also go to New York as often as I can because two of my best friends live there, and from there I always go on to New Jersey to see my grandmother, aunt and cousins.

Favourite cuisine from around the world? It’s a toss up between the carrots in Sweden (don’t laugh, they taste really carroty!), crispy duck in Hong Kong, or pretty much anything from the street market in Thailand. Oh, and tagine in Morocco. As you can guess I tend to eat a lot on holiday. 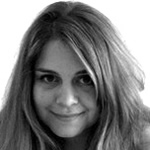 She’s currently finishing her fourth, which will be published in 2015.

Ilana is also a consultant and a columnist, and when she’s not being a workaholic, she’s training to become a competitive rifle shooter.