One bride, no groom, but a honeymoon to remember.

My tears don’t attract much attention at check-in. People cry in Departures all the time. ‘You might have missed your wedding,’ Simon says, digging out a Kleenex, ‘but there’s no way you’re missing your honeymoon.'

A little sob escapes me. I’ve definitely left my dignity back at the manor. ‘We’ll call it “The Great Escape”,’ he soothes, and proceeds to ply me with tissues and Martinis throughout the flight. I clink my glass against his beer, but I can’t muster any cheer. 'He didn’t want me, Si,' I weep. 'He’s an idiot. I always said that,' he replies, tersely.

Tell us about the location you chose for your SUNLOUNGER competition entry* I chose Mauritius. The story is loosely set at a hotel called La Pirogue, which is primarly small thatched villas in a coconut grove. It’s a place I know and the story is sort-of honeymoon themed and Mauritius has that nailed. It’s a fabulous country, havng not just luscious scenery but truly lovely people too.

If you could live anywhere in the world… Hmm, I can’t think of somehwere I would up the whole family and emigrate to, but there are places I would really like to spend a full year, so that I could experience it in all seasons. Venice definitely, Skagen (Denmark, see below), the British Virgin Islands and the Dolomites too – I want to see what the ski resorts are like without the snow!

Destination you’ve returned to the most times? Denmark! My parents are Danish, so we always trekked back for summer holidays and some Chistmases. My sister and one brother live there now, so we still go every summer. I get withdrawal symptoms if we don’t. Skagen, at the most northerly tip is just gorgeous and hot in the summer too – not bad for somewhere level with Aberdeen.

Favourite cuisine from around the world? CAKE!!! Well, actually I am a long-term student of the International language of desserts. I like to read menus in reverse so as to balance the main course with my choice of pud. As a kid I used to judge and compare European service station restaurants based on their chocolate mousse. Those road trips were very long… Otherwise I believe I could live on Sushi alone.

Favourite holiday cocktail? Lychee punch. In fact, any fruit punch. On reflection, I’d be very happy with any cocktail. I can do low maintenance…

What has been your worst holiday romance? The worst romance was probably on a French exchange trip to La Rochelle when I was 14. He was very cute, but kissed like a washing machine on full spin, and his upper canine teeth gave me two bruises on my top lip, which is rarely a good look. That nearly put me off snogging altogether…

And the best? I’ve been with Ian since I was 19, so all the best ones have been with him. A weekend break in Dublin led to his proposal on the Ha’penny Bridge. He’d planned to do it on the mid-point of the bridge, but a tramp had already bagsied that spot. Stargazing with him on Marina Cay in the BVI is a close second. 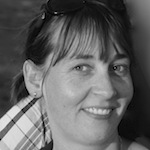 PERNILLE HUGHES has had many words printed in The Sunday Times, most proudly the word “boobs”.

Seduced by the promise of freebies she took her first job in advertising, but left when Status Quo tickets was as good as it got.

After a brief spell marketing Natural History films, she switched to working in Children’s television which for a time meant living in actual Teletubbyland, sharing a photocopier with Laa-Laa.

Now she lives in actual Buckinghamshire, sharing a photocopier with her husband Ian and their four spawn. While the kids are at school she scoffs cake and writes in order to maintain a shred of sanity.