You Don’t Bring Me Flowers

She’s in the most romantic setting in the world with the most unromantic man. Can beautiful Venice work its magic on him?

Billy didn’t buy flowers. He refused point blank to line the pockets of greedy commercialists who charged trumped up prices for ‘glorified weeds’ that would be dead in a week.

He didn’t buy cards either. Did Jen realise how much profit a card manufacture made from something that she would only throw in the bin the day after her birthday? Romance was a clever marketing tool designed to con money out of people, he pontificated at every available opportunity. If Jen was daft enough to buy him big padded cards then more fool her.

Tell us about the location you chose for your SUNLOUNGER 2 story… I chose Venice because to me it is the most romantic place in the world and I wondered what it would be like to be there with someone who was totally impervious to its charms. I’m so glad my partner loved it when we went last year!

Have your books featured any exotic destinations? I love cruising and in my HERE COME THE GIRLS I took my four female characters on a cruise of the Med – they visited Malaga, Corfu, Dubrovnik, Venice, Korcula and Cephalonia. Obviously I went on the same cruise for research purposes!  I’ve just written a novella called HERE COME THE BOYS for Kindle and my two characters there end up in marooned in Malaga after missing a cruise ship and have to find their way across to Croatia under their own steam to catch up with the ship. Ashamed to say this was based directly on an experience I had when I stupidly missed the ship with my two sons in tow.  But no experience is ever wasted when you’re a writer!

If you could live anywhere in the world… I think I could live quite happily in Sorrento. I loved it there – the people, the blue seas, the food, the sunshine, the language – oh and the ice cream.  I am an Italian woman in a Barnsley woman’s body.

Destination you’ve returned to the most times? Venice.  It’s impossible to get tired of the place.  And there are millions of handbag shops.  And they’re quite cheap!

Ticket, passport, money and… Red lipstick.  I’d rather forget my pants than my lippy

Favourite cuisine from around the world? Italian – I never get tired of pasta and tiramisu

What was your worst holiday romance? I met the most gorgeous man in Malta called Victor when I was sixteen and we went for a snog and he was the worst kisser I’ve ever met.  It was like being engulfed by a wet fish.  I went off him instantly.

And your best holiday romance? Again in Malta.  I went with my friend who copped off with a waiter and he suggested we make up a foursome.  I thought he was going to dredge up an ugly mate but he brought along six foot two strapping Raymond with Viking like shoulder-length hair.  He was stunning and travelled all over the island together.  And he was a great snogger. 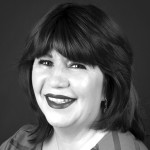 Milly Johnson is a Sunday Times bestselling author of ten books and two novellas, professional joke-writer, newspaper columnist, after-dinner speaker, poet, winner of Come Dine With Me and winner of the 2014 Romantic Comedy of the Year award. She is half-Glaswegian, half-Yorkshire and lives in Barnsley.

Her books are mostly set in Yorkshire and always feature Yorkshire women. She writes about love, friendship, betrayal, rather nice food and a little bit of that magic in life that sometimes visits the unsuspecting.

She likes big ships and carrot cake. She does not like lamb chops or marzipan.

Her latest novel – THE TEASHOP ON THE CORNER – is out now!